MAIN PUBLICATIONS ‘China in the Eyes of Asia’ 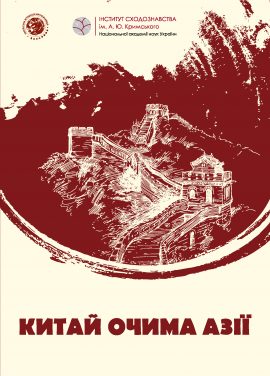 The collective monograph ‘China in the Eyes of Asia’ represents a collection of essays reflecting on the perceptions of China from the perspective of communities, elites and mass media in a number of Central, Eastern, South-Eastern and Southern Asian countries. The book sheds light on China’s manifold complex images that its neighbors have developed, while also contemplating on how these images may have influenced relations between countries and political decision-making.

The book represents a collective effort of experts in history, philosophy and history of ideas, as well as cognitive linguistics and discourse analysis. Methodological preferences of each particular author have been predetermined mainly by his or her experience and expertise, resulting in a cross-disciplinary panoramic view of China as seen by some of its historic neighbors. When it comes to the temporal scope of the research, the authors were particularly keen to examine the neighbors’ perceptions of the image of a new, modernized China. This image emerges through a combination of stereotypes, cultural filters and standpoints, since every country operates out of its own historical, ethnolinguistic and cultural context.

The sources for this study include corpora of political texts, public political speeches, media texts, as well as scholarly, analytical and historical research papers. Media create a linguistic image of China on the basis of culturally idiosyncratic ideas, values and sociopolitical preferences. The image of a modernized China is of great interest to the foreign media. In Asian media, China accounts for the majority of current media coverage under the rubric of foreign news. The media affectively contributes to the creation and reproduction of a national narrative of the world, which may be described as a set of images of particular countries. In creating these images the media is benefiting from a variety of techniques, including the selection of topics, linguistic and stylistic tools, as well as the manner, in which the historic context is being applied. The book provides an in-depth analysis of these techniques by studying materials that have appeared in some Asian media.

Chapter I ‘China in the Modern World: China’s Peaceful Rise, National Rebirth and Soft Power’ by V. O. Kiktenko demonstrates that the Chinese development model, its peaceful rise policy and the quest for an Asian identity based on the historic achievements of the Chinese civilization are the most important elements of modern values and the world outlook as reflected in China’s political and scholarly discourses. The notions of China’s ‘peaceful rise’, the ‘Chinese dream’ and ‘national rebirth’ are, however, viewed differently by other countries. Some countries see them in a positive perspective as a stimulus to the development of bilateral ties, while others see them as a disturbing factor in light of China’s fast growing influence on various social, political and economic processes. The Chapter, among other things, examines the United States, Japan and South Korea’s response to China’s policy initiatives. Of particular interest is the analysis of soft power policy, which is seen in China as a part of the national development strategy, or as an element of the country’s foreign policy, and plays an important role in creating a new image of China, in particular, in the neighboring countries. Over the last decade, China has been implementing a new national transformation strategy aimed at upgrading China from the status of a regional country to a global leadership role, with the soft power policy as one of its essential policy tools. The strategy in based on a presumption that the Chinese values, however different those may be from Western values, could be accepted not only by Asia, but also by the whole world. The Chapter draws attention to the fact that China still finds itself in the process of a dramatic social, economic and political change, which is far from being complete.

Chapter II ‘The Vietnamese View of China: The Case of an Asymmetrical Neighborhood’ by V. A. Musiichuk deals with the Vietnamese perception of the image of China as a factor that creates an asymmetrical relationship. The chapter examines the image of China as a verbalized notion that represents perceptions of the country, its regime, historical development and the modern state, as well as perceptions of the Chinese people and everything that has anything to do with China. By studying the regularity of resorting to metaphorical means in order to present the notion of CHINA in Vietnamese media discourse, the author has identified main trends in how the image of China is represented by the Vietnamese media. A separate subchapter studies the Vietnamese vision of the development of relations between the Socialist Republic of Vietnam and the People’s Republic of China by showing the main milestones in changing assessments of the historical evolution and the current state of Vietnamese-Chinese relations in Vietnam’s political discourse. The author demonstrates how the relations between the two countries have being changing dramatically from family and friendly to openly hostile ones and visa-versa. The author not only documents Vietnam’s current perceptions of China but also provides a model of the two countries’ asymmetrical relationship.

Chapter III ‘China in the Ideology of Japanese Pan-Asiaism’ by S.V. Kapranov studies the Chinese vector as the main trend in Japanese Pan-Asianism. With the borders of ‘Asia’ not clearly defined, Japanese Pan-Asianists believed that Eastern Asia was the core of Asia, with China being the core of Eastern Asia. The chapter carefully examines the specific nature of every period from the rise of Pan-Asianism in the 19th century to the present time. It also traces changes in the Japanese Pan-Asianism in general and in the way it treats China in particular. The author argues that the idea of popular solidarity and the regional integration of Asian countries still remains relevant. This is evidenced, among other things, by the Eastern-Asian community’s project, which reflects the sentiment of the various regional elites. However, there is no consensus in Japan as to the future of such partnership: politicians and intellectuals, although understanding that China will inevitably be the leader in the region, would rather prefer that Japan retains its leadership positions. The future of the East Asian community as a project depends on whether or not a model balancing the interests of China, Japan and ASEAN could be achieved.

Chapter IV ‘The Status of the Kazakh Ethnic Community in the 21st Century China: Kazakhstan’s Vision’ by I. V. Otroschenko lists out some of the priority topics for the Kazakh publications covering this subject. These include the Chinese Kazakhs maintaining their language, traditions and culture, the Chinese Kazakh media developing successfully, social and economic changes, as well as the possibility of the Kazakh ethnic community assimilating into a Han majority as the government’s initiative to develop China’s western regions is implemented. China’s paternalism with respect to Kazakhs, the social policy conducted over the last several years, as well as favorable cultural policy are appreciated and approved of by Kazakhstan writers. The latter also welcome Kazakhs’ participation in the local authorities of the regional autonomies. The Kazakhstani expert community also appreciates China’s efforts to ensure the successful functioning of the Kazakh media. At the same time, some Kazakhstani writers see the modernization of Xinjiang as a threat to language, traditions and culture of their nomadic people. Their main concern is that the introduction of bilingual schools and the increasing number of Han in Xinjiang, which comes as an element of its modernization, will lead to the assimilation of Kazakhs into the Han environment. Most authors argue that Kazakhs resettlement to Kazakhstan is the only solution.

Chapter V “The Image of China in Present-day Nepal” by D.Ye. Markov addresses the perception of China in Nepal. The chapter shows that Nepal’s current perception of China was largely influenced by the former’s relationship with India. The author attributes Nepal’s pivot to China, which became apparent in the 2000s when Nepal was undergoing cardinal changes, to Nepal’s fatigue resulting from a long period of Indian dominance, as well as to China not having been fully discovered by the Nepalese. The author believes that Nepal’s present-day social and political discourse, where India is represented as a threat and China as a close and generous friend, has the resulted from a series of dramatic events in the recent Nepalese history. These events include the civil war accompanied by the radicalization of a part of the Nepalese society, a severe economic crisis, as well as the country’s quest for its own identity after the monarchy consecrated by religion ceased to exist. Although Nepal’s foreign policy is still based on maintaining friendly relations with both countries, a pro-Chinese sentiment in the Nepalese society is clearly becoming more pronounced.

The authors of the collective monograph have attempted to provide answers to the following key questions: how do the neighboring countries perceive China, what role China plays globally, how has the image of China changed in their discourses, and how have all these changes affected the international relations. The variety of methodological perspectives and material as used by the authors have helped produce a multidisciplinary reflection on the changing image(s) of modern China as it appears in the eyes of its neighbors.