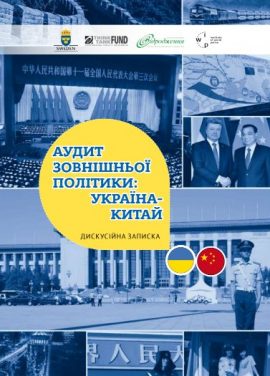 Full text of the report is available here

2. Ukraine’s interest towards China and China’s interests towards Ukraine

2.1. Chinese vision of the world order

2.2. Stages of the Ukraine-China relations

2.3. China as a strategic partner of Ukraine

2.4. The current state and prospects of Ukraine-China cooperation

2.5. Ukraine’s place in China’s One Belt, One Road project

2.6. Regional level of China’s cooperation in the 16 + 1 format: lessons for Ukraine

3. Existing and potential risks and conflicts

relations and the escalating conflict in the Donbas and Crimea

3.3. The problem of corruption in relations with China

3.4. Competition of geo-economic projects in Ukraine

4. Who is who? Interest groups in Ukraine and China

The Ukraine-China relations are facing certain challenges at the current stage. In the years of Ukraine’s independence, these relations have generally followed an upward trend and reached a peak in December 2013 when the Treaty of Friendship and Cooperation was signed. Currently, political changes in Ukraine, China’s vague response to Russia’s annexation of Crimea and its military aggression against Ukraine put a question mark in the bilateral relations.

The reserved position of the Chinese leadership on the Revolution of Dignity in Ukraine can reasonably be attributed to China’s cautious attitude to any radical social and political change. The fact that the Chinese leadership distanced itself from the condemnation of Russian aggression in 2014 is due to the desire to complete contracts for the supply of Russian state-of-the-art weapons in accordance with agreements reached by Xi Jinping and Vladimir Putin in March 2013. Another strong argument for Beijing was the wish to take maximum advantage of Russia’s international isolation in signing a package of oil and gas deals in May 2014 on conditions most favorable for China.

Unfortunately, Ukrainian political circles have a certain bias regarding “communist” China and a lack of understanding of the way power functions in the Confucian world. As a result, despite an appropriate legal foundation and a high level of strategic partnership with the PRC, Ukraine is not using opportunities for cooperation with the world’s largest exporter and second biggest economy, a country that has the world’s largest gold reserves and virtually unlimited investment opportunities.

Geopolitically, China is a conscious supporter of Ukraine’s European integration and has always defined Ukraine as “an important country in Europe”. China’s leadership welcomed the signing of the EU-Ukraine Association Agreement and has certain strategic plans to involve Ukraine in the Great Silk Road project, which is a personal initiative of China’s leader Xi Jinping. In the case of the successful implementation of this ambitious plan (which bypasses Russia and gives China direct access to Europe through Central Asia and the Caucasus), Ukraine will have a fundamentally new geopolitical place of “the first European country on the Silk Road”.

It should be noted that Europe is quite sympathetic to Chinese plans and, given the currently limited financial resources of the European Union, it does not oppose possible Chinese economic activity regarding Ukraine. Moreover, the EU is directly interested in modernizing Ukraine using Chinese money.

Thus, Ukraine has a unique opportunity to become the focus of the development of the Great Silk Road in the Black Sea-Baltic region, involving the Baltic states, Visegrad Four, Romania, Bulgaria, Belarus, and Georgia.

An important practical step taken by China towards the imple¬mentation of the Great Silk Road was the recently created Asian Infrastructure Investment Bank which has already aroused intense interest around the world.

China’s interest in cooperation with Ukraine is also linked to the decision of the Chinese leadership to create “foreign food bases”. In particular, it includes the use of Ukraine’s agricultural opportunities combined with China’s investment and technological capacities.

Military-technical cooperation and cooperation in the aerospace industry may become an important factor in the bilateral relations. China is still interested in the scientific and technical resources of the Ukrainian defense industry. Aircraft and engine construction can become a real area of Ukraine-China cooperation provided that there is a proper responsible attitude of the Ukrainian side.

In the current conditions, the Chinese side is eyeing the option of replacing Russia and becoming Ukraine’s leading military-technical partner. It is clear that this decision must be coordinated with Ukraine’s Euro-Atlantic partners. However, it should be noted that, unlike European integration, Ukraine’s accession to NATO raises certain concerns in China. However, all parties will follow their own national interests, which, thus, gives Ukraine free rein.

The main obstacle to the development of Ukraine-China strategic partnership from the Chinese side is the unconscious perception of Ukraine as part of the post-Soviet space to which Russia allegedly has some rights. On the other hand, Ukraine has a certain prejudice to “communist” China. Removing artificial barriers to the development of bilateral cooperation is the main task of the current stage of Ukraine-China cooperation.

Full text of the report is available here

This report was conducted within the project of the Institute of World Policy “Ukraine’s Foreign Policy Audit” with the support of the “Think Tank Support Initiative” implemented by the International Renaissance Foundation (IRF) in partnership with Think Tank Fund (TTF) with financial support of the Embassy of Sweden in Ukraine.

The contents do not necessarily reflect the views of the Swedish Government, the International Renaissance Foundation, Think Tank Fund. No part of this research may be reproduced or transferred in any form or by any means, graphic, electronic, or including photocopying or by any information storage retrieval system, without the proper reference to the original source.